Connecting these four towns is a river, a canal, a trail,and a state park. The Delaware River forms the boundary between Pennsylvania and New Jersey. As it flows past the Landmark Towns, it provides recreational opportunities on the water for boating, fishing, swimming and tubing. Bald eagles and osprey have become common sights for anyone watching for wildlife along the banks. 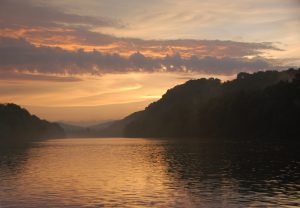 The Delaware Canal runs parallel to the Delaware River on the Pennsylvania side. The Canal was a major transportation route from the sources of coal and iron ore in Wilkes-Barre to the markets in the Lehigh Valley and Philadelphia from 1833 through 1931.

Today the towpath, along which mules once towed the loaded canal barges to Bristol and back, is now a National Landmark, a National Recreation Trail, and a part of the 165 mile D&L Corridor and Trail.

The Delaware Canal State Park  is the owner and caretaker of this historic national landmark that is filled with wildlife, beautiful vistas and trail users.

Please join us as we celebrate the Delaware Canal, a National Historic Landmark, which formed, defines and connects the Landmark Towns of Bucks County.

What is the Landmark Town Program? 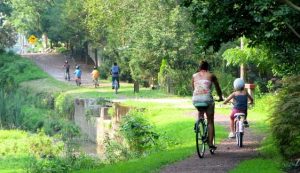 The Landmark Towns program of the Delaware & Lehigh National Heritage Corridor was designed to establish a regional approach to economic development and revitalization of the commercial downtown districts in the four boroughs of New Hope, Yardley, Morrisville, and Bristol. The towns work cooperatively to connect trail users to the amenities, culture and history offered in each community as well as connecting the residents of the communities to the history, culture, recreation and industrial heritage found along the trail. Thus, making the trail an economic engine for all.

Browse through this website and learn about the different towns, heritage sites and local events that make each community special in their own way. Spend a day in the Landmark Towns and you will be entranced by the authentic history, hospitality and warmth.