Each year, the Steering Committee of the Landmark Towns of Bucks County recognizes individuals, groups, and projects for their outstanding contribution to the local communities. The 2016 Landmark Towns Community Achievement Awards was held on Thursday, September 29 from 5:30 to 7:30 pm at historic Summerseat in Morrisville. 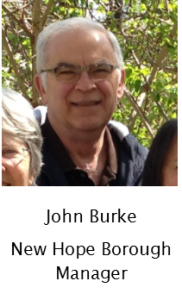 This year, the Board members chose to award two special awards to gentlemen who have contributed substantially to all the Landmark Towns.  John Burke is retiring as the Borough Manager in New Hope this month. He was a founding board member and former chairman of Landmark Towns. John was instrumental in several studies and plans that are still guiding the efforts of the program.

Rick Dalton was the park manager for the Delaware Canal State Park until his transfer this past spring to the Tuscarora State Park. Because the Delaware Canal links all the Landmark Towns, Rick’s outstanding work to restore the canal after a series of recent damaging floods over several recent years and his daily work on behalf of the historic national landmark have had a positive impact on all the towns and the region.

Tammy Marshall and Sue Schneck were recognized for their volunteer work to create and run the weekly Yardley Farmers’ Market. The two started their volunteer efforts with the Canal-o-ween and other community projects.  Hal Wilcox was recognized for his work on the Mega Sports Camp in Morrisville as well as his leadership on combatting the drug epidemic in the region in partnership with the local churches. Bob Egan was recognized for his years of work helping various New Hope community groups to maximize their fundraising efforts as well as his personal commitment to bringing quality musical talent to New Hope.

Three State Senators, Sen. Chuck McIlhinney, Sen. Tommy Tomlinson and Sen. Bob Mensch, cooperated to create proclamations for each of the winners. Each winner received a proclamation and an award.

The 300+-year-old historic Summerseat is a wonderful connection between our winners and our local history. Although most people had heard of historic Summerseat, they had never taken the time to tour it. The Awards Ceremony gave everyone an opportunity to see it for themselves. Sharon Hughes, president of the Historic Morrisville Society, gave a short summary of the importance of the role Summerseat had during the American Revolution and the many leaders who resided there.

Please take a moment to look through the photos of this memorable event and join us in thanking these community leaders for their contribution to making the Landmark Towns of New Hope, Yardley, and Morrisville, a more vibrant place to live, visit and work.