The Delaware Canal began commercial operation in 1833 and served as an important transportation route until the railroads over took it and serve was ended in 1931.  At that time, it reverted back to the Commonwealth’s ownership and eventually became a state park. The 60 miles long Delaware Canal was listed as a National Historic Landmark in 1974. The history of this structure is filled with stories of life on the Canal, fuel for the Industrial Revolution, floods, and recreational use. 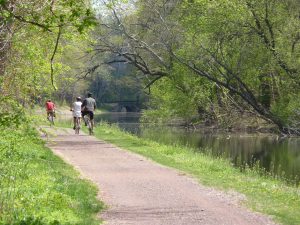 In 2015, a comprehensive process was launched will result in a study, Delaware Canal Vision Study, that will be the first step to identify strategies to reverse the physical deterioration of the Delaware Canal in order to assure the long-term improved maintenance and financial sustainability of this National Historic Landmark.

The process, which began in April 2015, sought innovative ideas in a series of public meetings over the next several months. Other key participants include the Delaware Canal State Park Advisory Committee and the Friends of the Delaware Canal. Funding for the project was provided by the William Penn Foundation and the Delaware & Lehigh National Heritage Corridor (D&L) serves as project manager.

The final study has not been released yet. If you are interested in both the past and the future of this remarkable asset that connects the communities along the Pennsylvania side of the Delaware River, take a moment and explore the material on the website. We will post the full Delaware Canal Vision Study when it becomes available.